I recently traveled to Asia on business and had nearly a week before I had to return home. As I contemplated my options, I decided to try a China city tour as most were only four to six nights and some even combine cities like Beijing and Shanghai, allowing me to see highlights and attractions in the same package.

Both Beijing and Shanghai make the perfect stopovers in China because they both feature numerous attractions to keep me busy. In particular, Beijing houses both the Great Wall of China and the Forbidden City, while being only a sleeper train ride away from Xian and the infamous Terra Cotta Warriors. While Shanghai doesn’t have the infamous attractions that Beijing does, it’s becoming the “China of the future” with first-class cuisine and nightlife but also the charm of its nearby water towns, where I can see overflowing gardens, canals, and the history of Chinese silk production. I found these amazing China travel packages that made it possible for me to see these sites whenever I had extra time after my business trip.

I found one of the best China travel packages combined both into a six-day tour and allowed me to see the best of both worlds. I started my tour in Beijing by exploring the Great Wall of China. We stayed near the less crowded Mutianyu section, which dates back all the way to the 6th century, and was redone and preserved in the 16th century. As a huge Olympic fan, I especially appreciated touring both the Bird’s Nest Stadium and the Water Cube used in the 2008 Beijing Olympics.

I also appreciated the history and legends of the Forbidden City, the Imperial Palace from the Ming Dynasty through the Qing Dynasty. Many of the famous emperors resided there, and I was able to see memorabilia in the Palace Museum. While I love exploring on my own and just trying new restaurants, I really savoured the Peking duck I had in Beijing as it’s their signature dish.

After leaving Beijing, we spent time exploring Shanghai. It’s known as China’s shopping capital, and it was easy to see why as I perused the Fuyou antique market, one of the most fun experiences to hunt for souvenirs for my friends back home. We also saw the infamous Chinese Acrobats in Shanghai one afternoon. As the performance was entertaining and fun but only lasts around an hour long, it was the perfect option before we found a nice location for dinner. 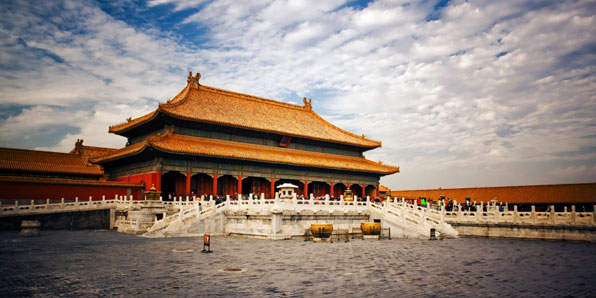 We also saw some of Shanghai’s other classical attractions, including opting to spend time in a nearby water town, Suzhou, and explore stunning gardens like the Yuyuan Garden in Shanghai and the Humble Administrators Garden in Suzhou. I loved learning about China’s silk production and travelled along the canals in a boat to truly get a picturesque view of the area. On a different tour, I chose to explore the water town of Zhujiajiao instead, where they feature more traditional gardens but also courtyard style houses and old bridges from the Ming and Qing Dynasties so it’s different than modern Shanghai.

I really enjoy these shorter city tours, especially when I’m already over there, and I feel it allowed me to explore China in another way.