Travelers headed to San Francisco on vacation have made a great choice. The city has much to love, from its historic neighborhoods to its ocean view to unique cuisine from around the world. That’s to say nothing of San Francisco’s year-round mild weather. A trip to the “City by the Bay” should be especially exciting for history buffs. Incorporated in 1850, San Francisco is known for the California Gold Rush and many other important events in American history. Below are five attractions that visitors to this notable city won’t want to miss.

Located in the Fisherman’s Wharf, the Baker’s Museum is part of the Boudin flagship building on Jefferson Street. Isadore Boudin established the Boudin Company in 1849, making the company San Francisco’s longest continuously running business. In addition to a gift shop, a Zagat-rated restaurant, and a full demonstration bakery, the building hosts a one-of-a-kind museum featuring exhibits and displays about the history of San Francisco. Visitors to the Baker’s Museum can learn interesting facts such as the several foods and drinks that originated in San Francisco, including fortune cookies, Crab Cioppino, Irish coffees, Mai Tais, and the popsicle. The Roll with the Bakers program allows visitors to roll bread with on-site bakers and receive an all-access bakery tour. Learn more @ http://www.bistroboudin.com/boudin-flagship/museum-bakery-tour/ 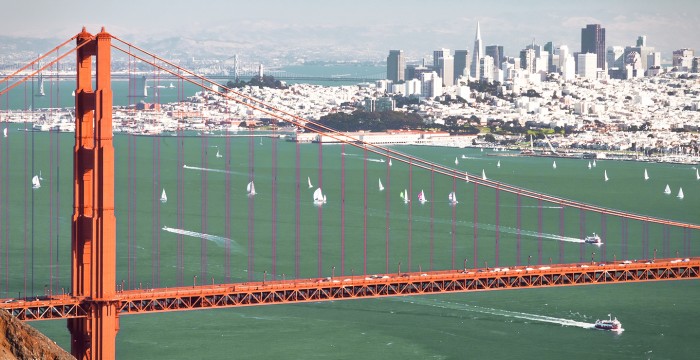 No visit to San Francisco would be complete without viewing this architectural marvel. Tourists can choose to walk across the pedestrian walkway for an up-close look or to view the bridge at a distance. The Golden Gate Bridge spans 1.7 miles from end to end. It opened in 1937 and today more than 120,000 vehicles pass over it every day. Since no visitor to San Francisco can resist snapping a photo of the Golden Gate Bridge, it is one of the world’s most photographed icons. Learn more @ http://www.parksconservancy.org/visit/park-sites/golden-gate-bridge.html

Alcatraz was the most famous and perhaps the most feared prison of its time. Opened in 1934 and closed in 1963, the prison was built entirely on the island of Alcatraz. It was home to some of the America’s most dangerous criminals, many of whom tried unsuccessfully to escape. Those who wish to see Alcatraz Prison from the inside need to take a ferry. Once there, visitors learn about the history of the prison through recorded cell house tours. They can also tour the grounds outside of the prison. Learn more @ http://www.alcatrazcruises.com/ 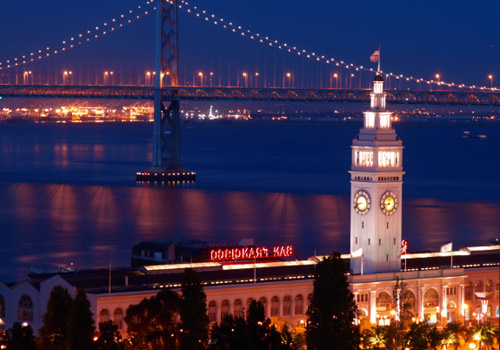 Chinatown consists of 24 city blocks of shops, restaurants, museums, temples, and food markets representing the country and people of China who have immigrated to San Francisco. Because there is so much to explore and because the surrounding parking is pretty terrible, it’s best to walk if possible. Chinatown in San Francisco is the largest community of its kind outside of Asia and the oldest in North America. Visitors to San Francisco should enter Chinatown through the Dragon’s Gate, which is located at the corner of Bush Street and Grant Avenue. One popular thing to do while in Chinatown is to watch local bakers make fortune cookies. learn more @ http://www.sanfranciscochinatown.com/

Cable cars and San Francisco are practically synonymous with one another. They started operating in the city in the late 1800s and haven’t stopped since. Cable cars are an ideal and fun way for tourists to see the city without the hassle of driving and parking. The Cable Car Museum, located on Nob Hill, houses three cable cars from the 1870s in addition to overlooking the winding wheels and large engines that currently power the city’s cable cars. Learn more @ http://sfcablecar.com/